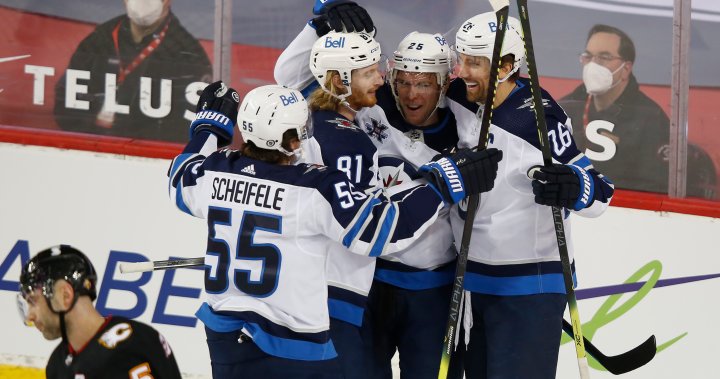 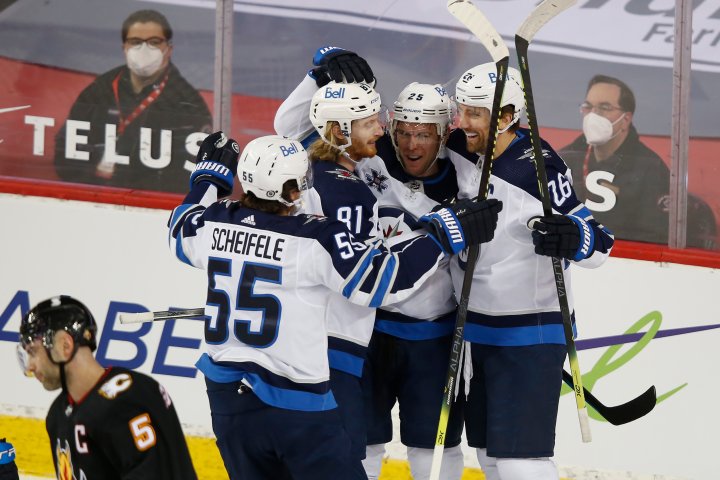 They weren’t able to rely on another four-goal performance from Andrew Copp, but the Winnipeg Jets knocked off Calgary 3-2 Friday night, tying the Toronto Maple Leafs for top spot in the North Division.

After a slow start on both sides of the puck, the Winnipeg Jets broke the scoreless tie eight seconds into their first power play midway through the opening frame.

Kyle Connor got the ball rolling with his point shot deflecting off Paul Stastny’s blade into Blake Wheeler’s left skate before finding its way to the back of the net for the captain’s tenth of the year and the Jets’ 11th powerplay goal this month.

The crossbar rang twice as Jets defenceman Logan Stanley nearly had his first NHL goal ringing a one-timer off the bar at the tail end of the first. In the second period, Noah Hanifin almost had the Flames in business, beating Connor Hellebuyck glove side but hit the iron, sending the puck high into the netting.

Five minutes into the second period, Tucker Poolman retreated into his own end before firing a quick pass to a streaking Connor at the Flames blue line. Markstrom didn’t bite on Connor’s fake slap shot forcing the team leader in goals to try and tuck it under Markstrom’s right pad. The Flames netminder couldn’t get a glove on the rebound and Connor tapped in his own rebound for his 17th goal on the campaign.

The third period had a noticeably different pace right from puck drop as the Flames were still looking to ruin Hellebuyck’s perfect game through 40 minutes.

RELATED: Winnipeg Jets at the half

Dylan Demelo was called for interference midway through the third giving the Flames their third chance with the man advantage.

Mikael Backlund took matters into his own hands, sending the puck to the net and a fortunate bounce off Milan Lucic put Calgary on the board.

Just minutes after giving the Flames a fighting chance to get back in the game, Lucic played the villain dangerously sending Mason Appleton into the boards head first. Lucic tacked on a roughing penalty giving the Jets a four-minute powerplay.

The Jets took full advantage and Wheeler does what he does best, setting up Stastny in front of the net who made no mistake scoring the second powerplay goal for the Jets.

The Flames wouldn’t go away, however, as Matthew Tkachuk deflected a shot from Elias Lindholm past the reigning Vezina trophy winner with just over two minutes left in the third.

The Flames had the Jets right where they wanted them after Stastny took a tripping call giving the Flames a six-on-four opportunity until the end of the third period. The Flames had their chances, but weren’t able to tuck in a third goal before the final buzzer.

The Jets were able to hold off the final push from the Flames, winning their third straight game on the road trip. Winnipeg picks up their 21st win of the season improving their record to 21-11-2.

With his 16th win this year, Hellebuyck is tied for third among goalies with Marc-Andre Fleury of the Vegas Golden Knights.

You won’t have to wait long for more Winnipeg Jets action as they hit the ice Saturday night at the Scotiabank Saddledome.

Kelly Moore starts the pre-game coverage at 7:00 p.m. before handing the mic over to Jamie Thomas and Paul Edmonds at 9:00 p.m. on 680 CJOB.

Federal carbon-offset proposal will likely give illusion of progress, even as it increases emissions

The motion to handle environmental racism is rising. This invoice may present the information it wants