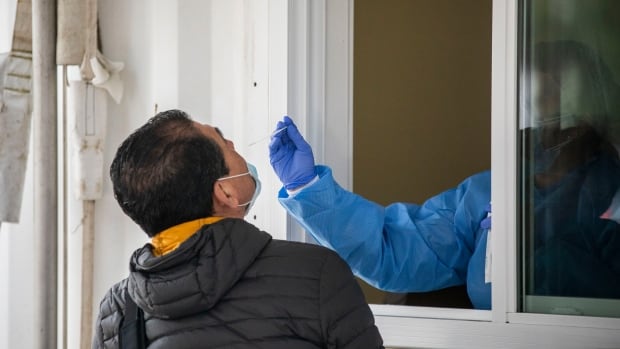 Procurement Minister Anita Anand said Canada is seeing a surge in COVID-19 vaccine supply, and she expects that to continue despite recent export restrictions from the European Union.

Anand says six million more doses of approved vaccines are expected to flow into Canada over the next three weeks. That would match the six million doses Canada has received since the approval of the first COVID-19 vaccine in December.

“We are closely monitoring the global environment, including export restrictions in a number of jurisdictions,” Anand said. “Our officials across numerous departments as well as our suppliers are working ahead of time to ensure that Canada’s vaccines continue to arrive in our country.”

The influx in vaccines comes as variants continue to spread across the country.

“While the news of increasing disease activity and shifting trends in severe outcomes is discouraging after so many months of sacrifice, we’ve made significant progress — and as the warmer days approach we’ll have more options to get outside as we work through this critical leg of the COVID-19 marathon,” Tam said.

“We are closer now than ever, but it is still too soon to relax measures and too soon to gather in areas where COVID-19 is still circulating in Canada.”

Manitoba reported 116 new COVID-19 cases and three related deaths. Public health officials in the province also reported that 46 cases of the more contagious B117 coronavirus variant have been identified in Manitoba.

In Ontario, hair salons and outdoor fitness classes can reopen with restrictions in regions that are under lockdown, the province announced.

The announcement comes as Ontario reported 2,169 new cases of COVID-19 on Friday and 12 additional deaths. Hospitalizations increased to 913, according to provincial data, with 359 in intensive care units.

WATCH | Is Ontario ending its COVID-19 lockdowns too early?:

Some doctors lockdown measures should be in place for another few weeks in Ontario, until daily cases dropped below 150. They say such a move would have prevented the current surge — and perhaps future lockdowns. 3:09

In Quebec, health officials reported 950 new cases of COVID-19 on Friday and seven additional deaths. According to provincial data, hospitalizations stood at 481, with 115 people in intensive care units.

The updated figures came a day after the province’s health department said that Quebecers who have had a confirmed COVID-19 infection will only need a single dose of vaccine, which will act as an immunity booster.

Coronavirus variants are on the verge of becoming dominant in Quebec and the province’s current measures to control spread are not enough, say experts. 3:20

New Brunswick reported 13 new cases on — all of them in the Edmundston region, located in the northwest of the province. This comes one day after the province stepped up restrictions in the region in the face of rising variant cases.

Newfoundland and Labrador saw no new cases. The announcement comes one day before public health officials relax widespread public health restrictions; all health regions in the province will drop to Alert Level 2 as of 12:01 a.m. NT Saturday due to the sustained low caseload.

Four premiers have planned to reopen the Atlantic bubble in mid-April, allowing people to travel between Nova Scotia, Newfoundland, P.E.I. and New Brunswick without isolating. 1:56

Nunavut surpassed the 50 per cent mark of adults in the territory who have received the first dose of the Moderna COVID-19 vaccine, according to Nunavut’s chief public health officer.

In the Northwest Territories, an outbreak at Gahcho Kué diamond mine has been declared over. The outbreak saw a total of 20 confirmed cases. Of those, eight were N.W.T. residents and 12 were workers from outside the territory, Dr. Andy Delli Pizzi, N.W.T.’s deputy chief public health officer, said in a release.

What’s happening around the world

As of early Friday, more than 125.6 million cases of COVID-19 had been reported worldwide, according to Johns Hopkins University, which runs a coronavirus case-tracking tool. The global death toll stood at more than 2.7 million.

The World Health Organization appealed on Friday for countries to donate doses of approved COVID-19 vaccines to help meet vaccination targets for the most vulnerable in poorer countries.

“COVAX is ready to deliver but we can’t deliver vaccines we don’t have. Bilateral deals, export bans and vaccine nationalism have caused distortions in the market with gross inequities in supply and demand,” Tedros told a news conference. “Ten million doses is not much and it’s not nearly enough.”

In Africa, Kenyan President Uhuru Kenyatta on Friday announced a halt to all movement in the capital, Nairobi, and four other countries on Friday as the COVID-19 outbreak reached its worst-ever stage in East Africa’s richest economy.

In the Asia, South Korea said it will extend its coronavirus distancing rules, which include an outside dining curfew and ban on gatherings of five or more people, for two weeks.

In Europe, a senior European Union official says 55 million doses of Johnson & Johnson’s COVID-19 vaccine will be delivered to EU member states in the second quarter of this year, starting next month.

In the Americas, Brazil saw a record 3,650 new COVID-19 deaths, with 84,245 new cases of the coronavirus, the Health Ministry said on Friday. It is the second record for daily deaths set this week as the virus continues to devastate Latin America’s largest country.

Federal carbon-offset proposal will likely give illusion of progress, even as it increases emissions