Shaun Yeo’s illustration depicting the grief of the Christchurch terror assaults has been co-opted to push anti-mandate rhetoric.

This submit was first printed on Emily Writes Weekly.

On March 15, 2019, illustrator Shaun Yeo sat right down to channel his devastation concerning the unfolding terrorist assault on the Al Noor Mosque and Linwood Islamic Centre in Christchurch.

Like so many New Zealanders, he was reeling from the horror of the mass taking pictures and wished to attempt to seize how he felt. In doing so, he captured the sensation of the nation together with his cartoon ‘Crying Kiwi’, which might develop into one of many best-known creative responses to that horrible day.

“I didn’t have any idea of the impact it would make,” he says, “but I remember finishing it and it was really raw. It captured my emotions and you don’t often get that with a drawing. I remember looking at it and thinking: ‘Yes – that represents how I’m feeling’.”

The picture rapidly went viral, shared 1000’s of occasions worldwide. “I had a feeling it was a powerful thing but I didn’t expect it to resonate so much,” he says.

Inside a day of posting the picture, individuals had been contacting Yeo to ask to purchase the picture or to pay him for using it.

“I was being inundated, people were offering money and trying to make money from it, but it was never created for profit. I never wanted any money from it and I didn’t want other people making money off of it either, that would’ve been wrong.”

Yeo and his spouse discovered themselves pleading with anybody utilizing the picture, whether or not for t-shirts, stickers or posters, that they donate earnings to the fund for the victims of the mosque assaults.

“I was clear from the start – I thought it was very wrong to make money from it.”

To keep away from the picture getting used for revenue, Yeo licensed it below Artistic Commons, making it free for anybody to make use of. “I wanted to give it to the community, give it to New Zealanders,” he says.

RELATED :  I hate traffic but knowing all these people are getting vaccinated makes me happy : newzealand

“I never imagined it would be used for anything but to remember and recognise the terror attacks.” 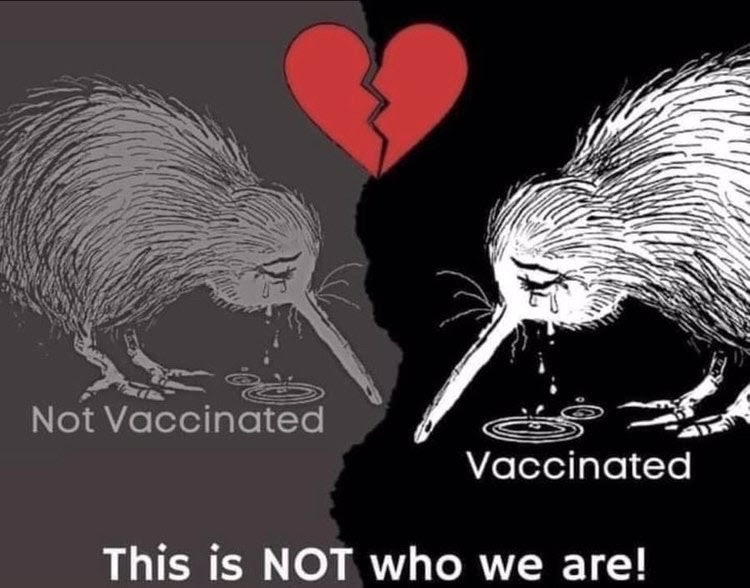 This week, the cartoon has once more been popping up on social media feeds – however for an terrible motive. Anti-vaccination and anti-mandate protestors have repurposed the picture to make use of to push their agenda.

Yeo says he’s deeply saddened by the selection to co-opt the cartoon and evaluate vaccination to the horrific Christchurch terror assault. “I find it really distasteful and quite upsetting. I felt quite emotional seeing it because in my wildest dreams, never did I think people would use it for political gain.”

He’s not the one one. This week I used to be contacted by many who had been disgusted by anti-vaxxers’ use of the Crying Kiwi picture.

Says Yeo: “I’m the person who drew the cartoon, but a lot of New Zealanders have taken ownership of it because they understand what it means. I’m as upset and angry as other Kiwis are that they’ve done this. I just find it very distasteful – I thought people would respect it.”

RELATED :  Protesters in Palmerston North today. I though I'd fix their signs : newzealand

There’s little that may be accomplished to cease the picture getting used for political functions, given its Artistic Commons licence. All Yeo can do is attraction for empathy.

Requested what he would say to these utilizing the picture for his or her anti-vaccination mandate trigger, Yeo says he’d hope they’d think about what it appears like for the households of those that misplaced family members within the terror assaults.

“I would tell them to stop using that image and think about the victims of the tragedy. You can’t separate the Crying Kiwi from that tragedy.”